posted by Michelle Seyler
November 10, 2020
By ANDREA CASTILLO
STAFF WRITER
NOV. 8, 2020
5 AM
This story was originally posted in the LA Times. 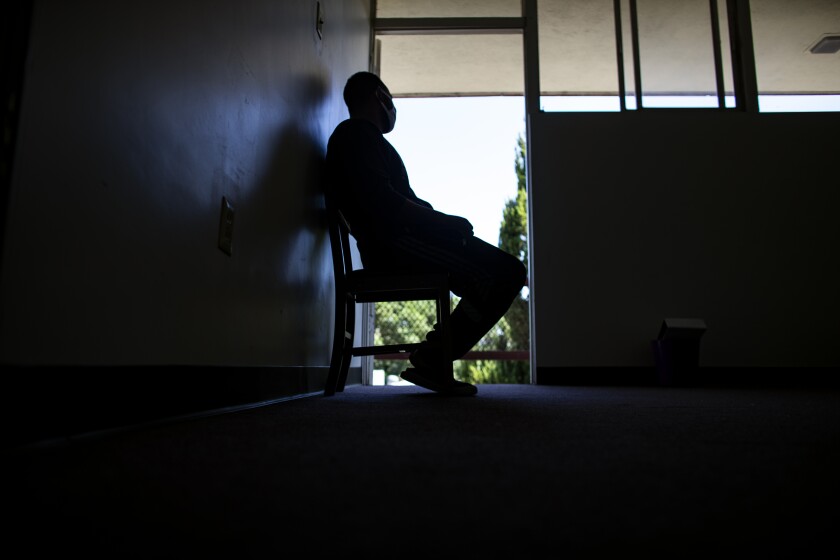 Tsegai, 30, who fled persecution in Eritrea over being a being member of an ethnic minority, sits in the doorway of his room while staying in a church on September 22, 2020 in San Bernardino county, California.
(Gina Ferazzi/Los Angeles Times)

Before Tsegai fled Eritrea and made the months-long journey to the United States to seek asylum, his image of this country was colored by what he’d seen on TV.

America, he thought, was the kind of place where people could be welcomed in with nothing and manage to turn their lives around.

But when the 30-year-old arrived last year on Christmas Day, officials cuffed his wrists and ankles and led him to an Immigration and Customs Enforcement facility, where he spent eight months detained. Tsegai asked The Times to identify him only by his first name out of fear of persecution.

“I didn’t expect it, so it was a very terrifying experience,” he said through an interpreter.

A nonprofit paid Tsegai’s $25,000 bond and on Sept. 8, he was released from the Adelanto ICE Processing Facility and moved into an Episcopal church two hours east of Los Angeles.

Tsegai is one of a growing number of immigrants across the country finding temporary refuge in houses of worship rendered empty by the coronavirus pandemic, after being released from detention facilities.

It’s the latest iteration of the sanctuary movement, which began in the 1980s as U.S. church leaders responded to the plight of Central Americans seeking political asylum during the civil wars that wracked the region.

With President Trump’s election and subsequent hardline enforcement of illegal immigration, congregations again have mobilized to shield those they felt deserved to stay. ICE has a long-standing policy of generally avoiding enforcement activities at “sensitive locations” including churches.

The Trump administration has said that, if reelected, he would double down on immigration restrictions, limiting asylum grants, punishing sanctuary cities and expanding the so-called travel ban. Alternatively, former Vice President Joe Biden has vowed to dismantle Trump’s sweeping changes.

The most recent twist varies from traditional political sanctuary, in which some people remain on church property for months or years to avoid arrest by ICE. The COVID-19 pandemic has added urgency to offering shelter to immigrants.

More than 7,000 detainees have tested positive for the coronavirus across the country, according to ICE, and eight have died of COVID-19. With outbreaks infecting hundreds at some facilities, including 242 at Adelanto, immigrant advocates have mobilized to seek the release of as many as possible.

In response to federal lawsuits in California, judges have compelled the release of hundreds of immigrants at the state’s five ICE facilities to permit space for social distancing, quarantine and isolation. In one scathing order last month, U.S. District Judge Terry Hatter accused federal officials of “straight up dishonesty” while directing ICE to reduce the population at Adelanto by more than one-third.

Other detainees have been released on bond pending the outcome of their cases in immigration court.

California isn’t the only place where churches have stepped up. Congregations in states such as Texas, and the region including Maryland, Virginia and Washington, D.C., are sheltering immigrants released from detention, said Myrna Orozco at Church World Service, which works with and tracks the sanctuary movement.

“The sanctuary movement definitely paved the way for congregations to be creative in how they offer welcome to folks,” Orozco said. With detention centers still flaring up as COVID-19 hotspots, she said, “hopefully this will continue to increase as people are released.”

Before they can be released from detention, immigrants must provide the address of a legal sponsor to federal officials. For many, it’s the address of a relative or friend. But some, like Tsegai, arrive knowing no one.

In an organized resistance to Trump’s policies, hundreds of people had once pledged to open their homes to immigrants being released from detention centers. But the pandemic has forced many families to tighten their social circles, cutting off a key source of transitional housing.

That leaves congregations such as Heritage United Methodist Church in South Los Angeles to fill the gap. Lead pastor the Rev. Ivan Sevillano said he understands intimately the plight of immigrants: He lived for 10 years without legal status after overstaying his visa from Peru.

Heritage, a historically Black church dating to the 1880s, has long served the surrounding homeless community, offering people Sunday breakfast, showers and the ability to park in the church lot. Its 15-member leadership board voted last summer to begin taking in immigrants released from detention centers.

“Though we don’t open for services, always throughout the week we are doing something for someone,” Sevillano said. “Many of us Christians preach but don’t act. The important thing is also to act because there are people out there that need help.”