·       Is an Evangelical Assemblies of God Pastor

·       Had a stay of removal granted under former administration

·       Was detained this morning and is facing deportation

We will not stand by while his family is separated and his ministry harmed.

If you can attend, please let us know which day(s) you will be there at the form on https://www.matthew25socal.org/noevigil/

If you are somewhere else in the country, please join us in prayer, ideally in front of your local ICE offices.  If you gather in prayer, please take a picture, post a picture with this hashtag #libertad4noe or #pray4noe and send it to matthew25socal.org with the date and place noted.

We will continue to update you on upcoming and ongoing prayer vigils until he is released and his family reunited. 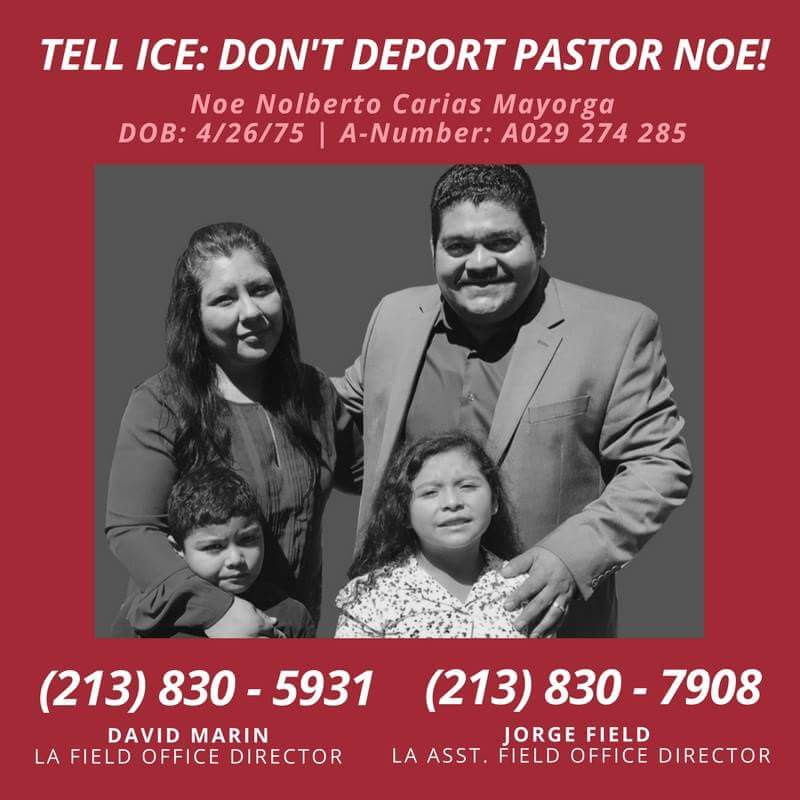 2)     If you are in Southern California, contact the ICE leadership:

Script: I am (Title/Name) from (Church/Ministry/Organization) and I am calling to ask for the reléase from detention of Pastor Noe Carias Mayorga who has qualifying cases through his marriage to a US citizen and his ministry as an Assemblies of God Pastor, has no criminal history and who has motions pending for removal of 25 year old deportation orders resulting from entering without permission as a teenager.

3)     Send an email and call the member of the House or Senate Homeland Security Committee closest to you and ask for their help:

List of Republican members of the Homeland Security Committee of the House:

Democratic members of the Homeland Security Committee of the House:

Republican members of the Homeland Security Committee of the Senate:

Democratic members of Homeland Security Committee of the Senate