[Jewish Journal] The Day(s) the Rabbis Got Arrested 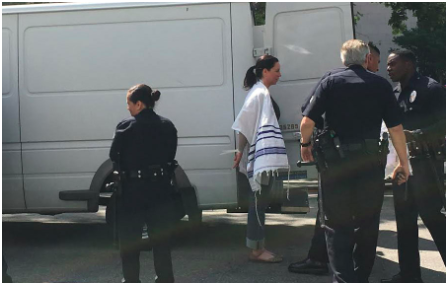 In June, a group of Jewish, Christian and Muslim clergy stood in lines and joined hands in an act of civil disobedience outside the Los Angeles downtown courthouse. Several were arrested. The purpose: to show moral outrage for immigration policies that detained children who entered the U.S. illegally. But does a rabbi getting arrested make an impact on the issue?

Civil disobedience has been a tool of nonviolent protest for centuries, practiced by figures such as Mohandas Gandhi, Rosa Parks and Martin Luther King Jr. In the 1970s and ’80s, according to the Center for Jewish History, activists from the American Soviet Jewry movement frequently picketed Soviet consulates to raise public awareness, “often deliberately getting themselves arrested by the police to amplify their message.” And since the November 2016 U.S. election, protests on issues such as immigration, health care reform, gun reform and more have proliferated.